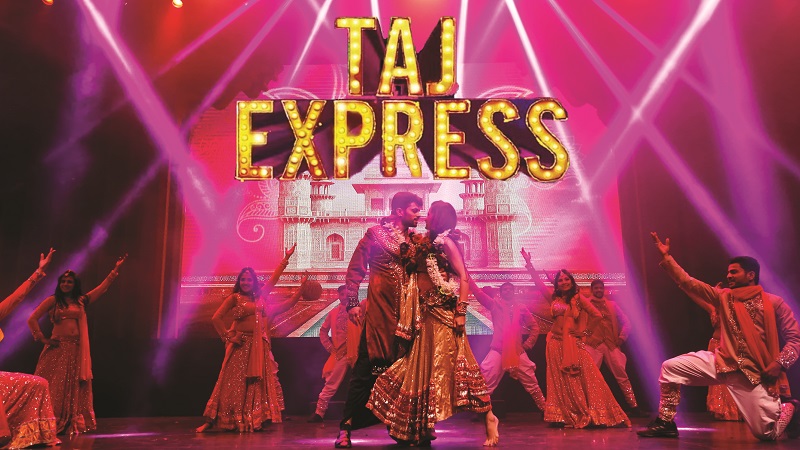 About the Show
Taj Express explodes with the sounds of India and Bollywood, capturing the vibrant, expressive spirit of the world of Bollywood movies that have been entertaining billions of people in India for generations. Through a fusion of film, dance, and music, this dazzling international sensation took audiences on a live cinematic journey through modern Indian culture and society during their 2017 US tour.

Shruti Merchant, (Director/Producer) is also amongst the top choreographers in the industry. Last year she was a judge on India's leading dance reality show "Dance India Dance Season 4" and is serving as a judge on the show again in 2015. More information can be found on www.shrutimerchant.in.

The Story
"If A.R.Rahman is the Mozart of Madras, I want to be the Beethoven of Bollywood."

At the heart of Taj Express is the story of one man’s passion and another man’s genius.

A young aspiring Indian composer Shankar is given his first big break in the film business, employed to create the soundtrack for a brand new Bollywood movie. Shankar dreams of writing a song as successful as A.R Rahman's Oscar winning smash-hit 'Jai Ho' in the movie Slumdog Millionaire. A.R. Rahman is India’s greatest ever musical genius and Shankar is his greatest fan.

The Plot of the film Shankar must score is a romantic adventure across kaleidoscopic India, on-board one of India's iconic Trains.

Shankar must create the music of the streets, the folk festivals, the temple rituals, and a love song for "the greatest love story ever told".

Shankar invites the audience into his music studio where we meet the experienced session musicians he has employed to make the soundtrack under the producer's punishing deadlines.

Comedy is created as his youthful ambitions clashes with their sarcasm and cynicism.

As each song is composed we cut to the film set to see how his powerful, thrilling, rhythmic music is interpreted by a stunning company of gorgeous dancers.

When Shankar hits writer's block, he researches A.R Rahman's incredible life story to discover the reason for his success. Shankar becomes obsessed with Rahman's life,  his beliefs and inspiration, his struggles and set-backs, and Rahman's determination to unite the nation with music.