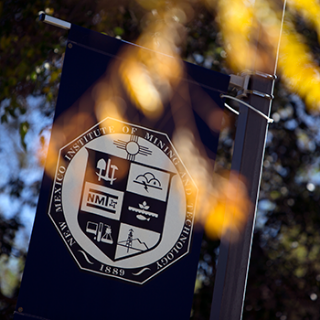 This was truly a worldwide competition. The best of the best compete at this stage and Arash won this very outstanding award. We are all very proud of him.

Memarzadeh graduated in May 2015 and now works for California Resources Corporation, the company that also supported his master’s research project. For his thesis work, he created a large testing system in a third-floor lab in MSEC.

“We inject steam and specialized solvents into the heaviest, most viscous  oil in the world,” Memarzardeh said. “We built a scaled-down replica of an oil reservoir owned by the investors and are pumping in various fluids to monitor all their properties inside the model. It’s a lot of actual experiments, not just computer simulation.”

Memarzadeh’s goal was to see how heavy oil reacts to steam and various solvents. He also created a simulation program that helps determine how the system will behave under different circumstances.

“I developed a never-been-seen-before thermodynamic model of hydrocarbon and steam interactions,” he said. “The testing system shows how much we can enhance oil production with solvent, while the program shows exactly how steam reacts with solvent inside the system.”

Dr. Rahnema said Memarzadeh was very deserving of the award because his work will contribute to more efficient and economic heavy oil recovery.

“Arash’s biggest challenge was designing and setting up the subsurface conditions,” Dr. Rahnema said. “He was required to create sustainable high temperature conditions and while working with extremely thick, viscous oil. Arash actually built all the equipment from scratch – with help from the machine shop. It’s a New Mexico Tech facility and he built it.”

Rahnema said Memarzadeh’s project is indicative of the practical research being conducted in the Petroleum Engineering Department at Tech.

“The strong point of Arash’s work is how we integrate pure research in the lab with a real-world problem in the field,” Rahnema said. “That close integration was an important feature of Arash’s research. We brought a graduate student onto continue his work in the department and we hope to continue the program this year.”

Memarzadeh came to Tech in 2012 after earning his bachelor’s in physics at St. Mary’s College of California. He qualified for the international event by winning a regional paper competition, which was held at New Mexico Tech in the spring.

“This research is a big deal within the industry,” he said. “If successful, it’ll result in a full scale pilot test well.”

He completed an internship with California Resources Corporation during the summer of 2014. His internship gave him first-hand knowledge of the problem in the field and the objective for the research project. The company then asked him – along with his advisor Dr. Hamid Rahnema – to build the testing system and perform simulation work.

The conference award was especially gratifying because of the large support of New Mexico Tech students, faculty and alumni, he said.

“We had a lot of supporters from New Mexico Tech who came and watched the competition, along with my fiancé,” he said. “We must have had over 30 Techies there and everyone cheered so loudly, overwhelming the rest of the audience when they announced my name. I’ll remember that loud applause for the rest of my life.”