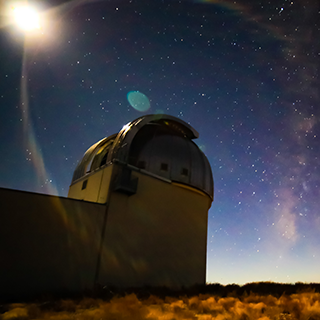 Four Tech students have been recognized by NASA and the New Mexico Space Grant Consortium for their research projects and academic excellence.

SOCORRO, N.M. – Four Tech students have been recognized by NASA and the New Mexico Space Grant Consortium for their research projects and academic excellence.

Bloemhard will use her award for her dissertation research project titled, “Ground-Based Characterization of Exoplanets.” Exoplanets are planets that orbit stars other than the sun

A native of Gloucester, Va., Bloemhard earned her bachelor’s at George Mason University. She is working on two projects related to exoplanets: her fellowship/dissertation research and NESSI, the New Mexico Tech Exoplanet Spectroscopic Survey Instrument. For her NASA fellowship, she is using data from the Infrared Telescope Facility, or IRTF, atop Mauna Kea in Hawaii. She is using spectroscopic data to analyze various characteristics of exoplanets. She will also present research at two conferences.

She hopes to have a paper published later this summer about her work. If she is successful, she said she might apply to get more observing time at the IRTF.

“I have enough data for my dissertation, but with astronomers, more data is better,” she said. “If I get a publication out, that would be really compelling evidence that my methods work and that would justify getting more time on the IRTF.”

Bloemhard said she was surprised that she received the fellowship – primarily because she had applied unsuccessfully twice before.

Stephen Davis will use his fellowship to continue his research into self-igniting propellants. His research project is titled, “Nitrous Oxide Hypergolic Propellants.”

Working with Dr. Nadir Yilmaz of the Mechanical Engineering department, Davis is pursuing a Ph.D. in Materials Engineering. His project will include thermodynamics and fluid mechanics on a nitrous oxide-based fuel that can be used for thrusters on small satellites. His goal is to find a propellant that is less toxic and corrosive that those currently in use.

“If you can minimize the hazards, you can ideally reduce the cost as well,” he said.

Davis, who went to high school in Edgewood, Md., earned his bachelor’s at New Mexico Tech in chemical engineering and his master’s in materials engineering.

“I’m excited to have some funding to continue my work and perhaps get a research paper published,” he said.

Daniel Guillette, a master’s student in electrical engineering, won his fellowship for a project titled, “Making CubeSat Integration Simpler.” Working with advisor Dr. Anders Jorgenson, Guillette’s proposal relates to design and construction of “CubeSats,” which are miniature satellites about the size of a loaf of bread that are intended as learning tools for high school students.

“CubeSats were developed by Cal Tech to help high schools or others achieve space launch … but you still need a ton of information to achieve it,” Guillette said. “We’re proposing to take the structure of the satellites and try to integrate connects and smart routing data lines and power lines to simplify the process. My advisor and I propose building the satellite and space components into something like Lego blocks.”

They aim to be able to use 3-D printers to build the structure, upon which components and connectors can then be installed. That would allow for simplified customization.

This project will serve as Guillette’s master’s thesis. Originally from Los Alamos, Guillette earned his bachelor’s at New Mexico Tech, also in electrical engineering. He has completed internships at the Air Force Research Lab at Kirtland Air Force Base in Albuquerque and hopes to pursue a career in space electronics or a similar space-related venture.

A rising senior in Materials Engineering, Max Holliday is looking forward to his 10-week internship at the NASA Glenn Research Center in Cleveland, Ohio.

He said he was the top candidate chosen for his position out of more than 2,000 applicants across the country.

“I will be working on an individual project that has to do with nickel superalloys, as well as a group project,” he said. “They use superalloys mainly in jet engineers and turbines. You need strong alloys that can take a beating and withstand high temperatures and that won’t corrode or oxidize”

He said his project is likely to include imaging, testing, stress-testing and microscopy of super-alloys. After the 10 week assignment, he will present my research at the NASA headquarters in Washington, D.C.

Holliday said he moved around a lot as a youth. He calls Santa Fe home, but graduated from high school in Albuquerque.

New Mexico Space Grant Consortium is a member of the congressionally funded National Space Grant College and Fellowship Program which is administered by the National Aeronautics and Space Administration, better known as NASA. Consortium fellowships and scholarships are competitively awarded based on application information, faculty recommendation, GPA, the research project, and its alignment to NASA’s mission.