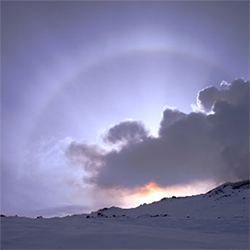 The Department of Earth and Environmental Science operates a year‐round network of scientific instrumentation (seismic, infrasonic, geodetic, and environmental) on the active Mount Erebus volcano in Antarctica for fundamental research in volcanology under support from the National Science Foundation, Office of Polar Programs.

Each year, Austral summer observations and surveillance are made by New Mexico Tech students and faculty from a field camp situated 3400 meters high on the volcano. Mt. Erebus, the world’s southernmost active volcano, features a unique lava lake in its summit crater and has frequent eruptions. Data is telemetered to the Crary Science Lab at McMurdo Station, Antarctica, and then transferred via the Internet to Tech for year‐round analysis and archiving in near real time.