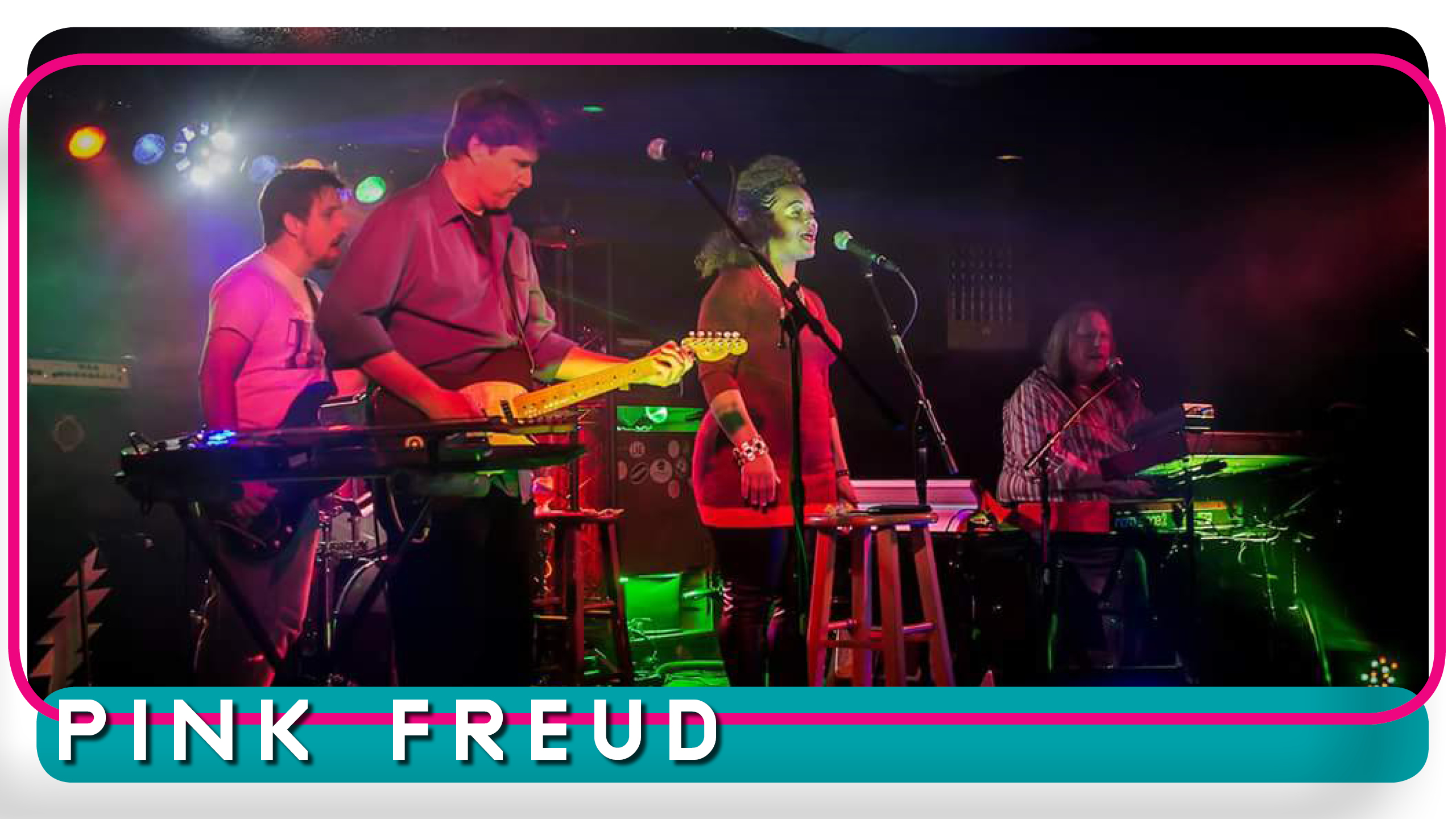 About the Show
PINK FREUD faithfully recreates the innovative, psychedelic sights and sounds of Pink Floyd, and takes you on a time warped trip back to the space age! Pink Freud will blow your mind via a brain-bending experience through the sound effects and music of Pink Floyd, and more. As their notoriety grows in the Southwest, audiences are talking about Pink Freud, and their versions of classic tracks like Pink Floyd’s “Brick in the Wall," “Money," “Wish You Were Here," “Pigs," “Comfortably Numb," “Time,” “Echoes" and a lot more.

PINK FREUD is a band of veteran musicians who have gotten together to perform the classic rock of Pink Floyd, the way it was meant to be heard, live, and with power. If you like the music of “Dark Side Of The Moon," “Wish You Were Here," “Animals” and “The Wall," “Meddle" and “The Division Bell," then you’re going to love PINK FREUD.

About the Artists
TONY ORANT, on atmospheric keyboards, screaming organ, piano and vocals, is a stalwart of the Chicago music scene, having toured the world with Hello Dave, Rico!, Gertrude, The Core, CleoPatricx, The Proud and Social Security among others. Tony is fired up to be bringing his years of recording and performing experience to recreating the sights and sounds of Pink Floyd.

CHUCK HAWLEY, a monster guitar player, is a veteran of many New Mexico bands, and leads his own Chuck Hawley Group. His huge tone, and fret finesse will leave you slackjawed in awe. His vocal takes on songs like Fat Old Sun recreate the innocence of the early Floyd, A connoisseur of rock guitar, Chuck is an encyclopedia of riffs and sounds, and will stun casual fans and hardcores alike. Fun & Little Known Fact:  Chuck grew up in Socorro.  His dad is a geologist who worked for the Bureau of Mines.  I (this is Ronna Kalish talking, NMT PAS Director) knew Chuck way back in the 1980s Albuquerque music scene.  Chuck's band then was Splinter Fish. They used to play for student dances--the NMT SGA would bring bands every weekend to the SAC--and Chuck and one of his bandmates, Deb-O, would come back raving about these gigs, how cool the students were and the "scene" at NM Tech.  Chuck's subsequent bands, Manna from Nowhere, Mucho Buddha, Chuck Hawley Group, and there are probably a few others, continued to perform in Socorro at the Capitol Bar.  Two years ago PINK FREUD headlined SocorroFest.  Last year they performed for our live-stream Season, and this year, we so hope to have an audience!

BRAD YABLONSKY, drummer extraordinaire, has logged years on the New Mexico jazz scene, and is the perfect percussionist for this band. He is known for his deep pocket and impeccable sound.

DOUGLAS BELLEN, anchors Pink Freud with his subtle bassplaying. A schooled veteran of the New Mexico scene (Innastate, The Jir Project, and others), Doug plays many instruments, and his vocal talents add another dimension to Pink Freud. His attention to detail further pushes the recreation of Pink Floyd music the way you remember it.

RACHEL ROSS is an outstanding vocal talent from New Mexico. Don’t let this mild mannered woman fool you: she has the voice of prime Aretha Franklin, and soul to spare. She adds an angelic quality to the vocals of the band, but when she steps out front for songs like Great Gig In The Sky and Mother, mouths drop, ears tingle and goosebumps appear.

CARLI MARSHALL is saxophonist for Pink Freud. A New Mexico native, she has graced the stages and elevated the music of bands like Innastate, The Jir Project, and The Jennays. Carli brings you the melancholy and soul stirring horn melodies of classics like Crazy Diamond and Us and Them, pushing Pink Freud into spacial reincarnation!

Together, Tony, Chuck, Brad, Doug,Rachel and Carli recreate the classic rock sounds of Pink Floyd and will take you to the Dark Side of The Moon and beyond!