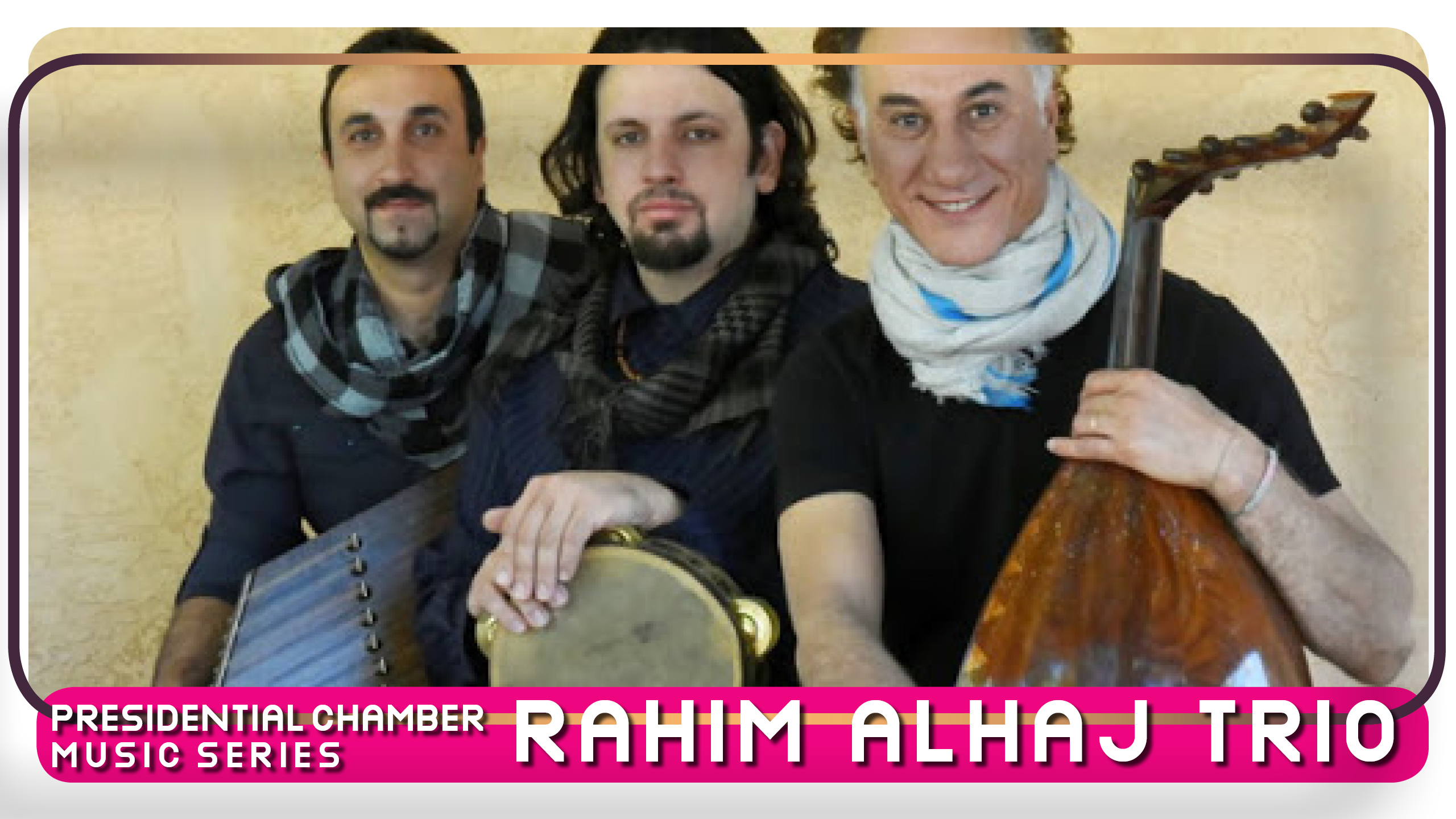 The Rahim AlHaj Trio features 2-time Grammy nominee, National Endowment for The Arts National Heritage Fellow, Smithsonian Folkways Recordings artist and Iraqi oud virtuoso and composer Rahim Alhaj joined by Iranian santour maestro Sourena Sefati and world percussion master Javier Saume Mazzei. The trio perform Alhaj’s intricate compositions. Rahim’s music delicately combines traditional Iraqi maqams with contemporary styling and influence. His compositions evoke the experience of exile from his homeland and of new beginnings in his adopted country. His pieces establish new concepts without altering the foundation of the traditional “Iraqi School of Oud.” The Rahim AlHaj Trio’s debut CD, One Sky is a deeply immersive sonic experience as the three world-renowned musicians weave transfixing textures and melodies that transport listeners to a world of tranquility and beauty. Beyond its music, the album represents AlHaj’s artistic appeal to each of us to make a positive difference toward a better world, however we can. Sefati and Malluf join AlHaj in this spirit of friendship, tolerance and an acknowledgement that everyone must live in peace under the same sky.

Rahim AlHaj (oud) was born in Baghdad, Iraq and began playing the oud (Arabic lute) at age nine. Early on, it was evident that he had a remarkable talent for playing the oud. He studied under the renowned Munir Bashir and Salim Abdul Kareem, at the Institute of Music in Baghdad, Iraq. He graduated in 1990 with a diploma in composition. He holds a degree in Arabic Literature from Mustunsariya University in Baghdad. In 1991, after the first Gulf War, he was forced to leave Iraq due to his activism against the Saddam Hussein regime and lived for some years in Jordan and Syria. He moved to the US in 2000 as a political refugee and has resided in Albuquerque, New Mexico ever since. Rahim has performed around the globe (including Europe, China, India, and Russia) and is considered one of the finest oud players in the world. He has won many accolades and awards including two Grammy nominations. Rahim has recorded and performed with other master musicians of varied backgrounds and styles including guitarist Bill Frisell, modern accordion innovator Guy Klucevsek, Indian sarod maestro Amjad Ali Khan, and indie rock pioneers REM. He has composed pieces for solo oud, string quartet, symphony orchestra, and beyond. Rahim’s music delicately combines traditional Iraqi maqams with contemporary styling and influence. His compositions evoke the experience of exile from his homeland and of new beginnings in his adopted country. In 2015 Rahim was awarded the National Endowment for the Arts National Heritage Fellowship, the highest honor for traditional arts in the USA.

Sourena Sefati (santour) was born in Ramsar, Iran. He started playing santour (hammered dulcimer) at the age of eleven. He received his Bachelor’s degree in Iranian Music from University of Tehran (2002) and his Master’s degree in Iranian Music Performance from Art University of Tehran (2008). He won the award for best composer of Iranian music at Art University in 2006. He was music instructor at Art University and Elmi-Karbordi University in Tehran from 2008 to 2014.  Sourena is the author of a book of etudes for santour, has performed in Europe, Asia, and Africa, and was soloist at Iran Broadcasting Symphony Orchestra (2009 to 2014), Iranian Chamber Orchestra (2009), and Mehrnavazan National Orchestra (2011). Sourena moved to the United States in 2014, and teaches Iranian music in Albuquerque.

Javier Saume Mazzei (percussion) is a native of Caracas, Venezuela. Javier began playing percussion at the age of eight. He holds a B.A. in Music from Roosevelt University where he studied classical percussion with Ed Harrison, drum set with Phil Grateau and Paul Wertico and latin percussion with Ruben Alvarez. Javier has performed with Rhonda Richmond, Reginald Veal, Herlin Riley, and Cassandra Wilson, and the Symphony Orchestra "Sistema de Orquestas Juveniles de Venezuela". He has performed internationally in concerts, master classes, and residencies in Beijing, China, and at the Kennedy Center in Washington D.C. and Carnegie Hall in New York with Sones de Mexico Ensemble. He currently records with Sones the only group in NARAS history to be nominated for the Latin Grammy and Grammy in the same year. Javier also tours with the Ensemble Español.


The Presidential Chamber Music Series
The Presidential Chamber Music Series began 30+ years ago, conceived by Adam Gonzalez, faculty in the NM Tech Music Program under Director Michael Iatauro.  The first incarnation was supported by then NM Tech President Dr. Laurence Lattman, with all concerts free to the community, a tradition that continues, and featured The Helios Quartet, of which Adam Gonzalez was the cellist.  That group had a variety of members but the two with the longest tenure were principal violinist and concertmaster of the NM Philharmonic, Krzysztof Zimowski, and NM Philharmonic violist Willy Sucre.  When Adam Gonzalez left the Southwest, the Helios Quartet stayed together for only a short time, but the baton was picked up by Willy Sucre who curated these chamber music concerts, developing the works to be performed and bringing together the mostly NM musicians. These four concerts per year featured classic mainstays in chamber music literature as well as unique and lesser known compositions, often by international and/or South American composers.  The program continued to be sponsored by NM Tech President Dr. Daniel H. Lopez and now Dr. Stephen G. Wells.  It was an amazing 25+ years under Willy Sucre, who decided to take a break the year before the pandemic to pursue other musical passions.