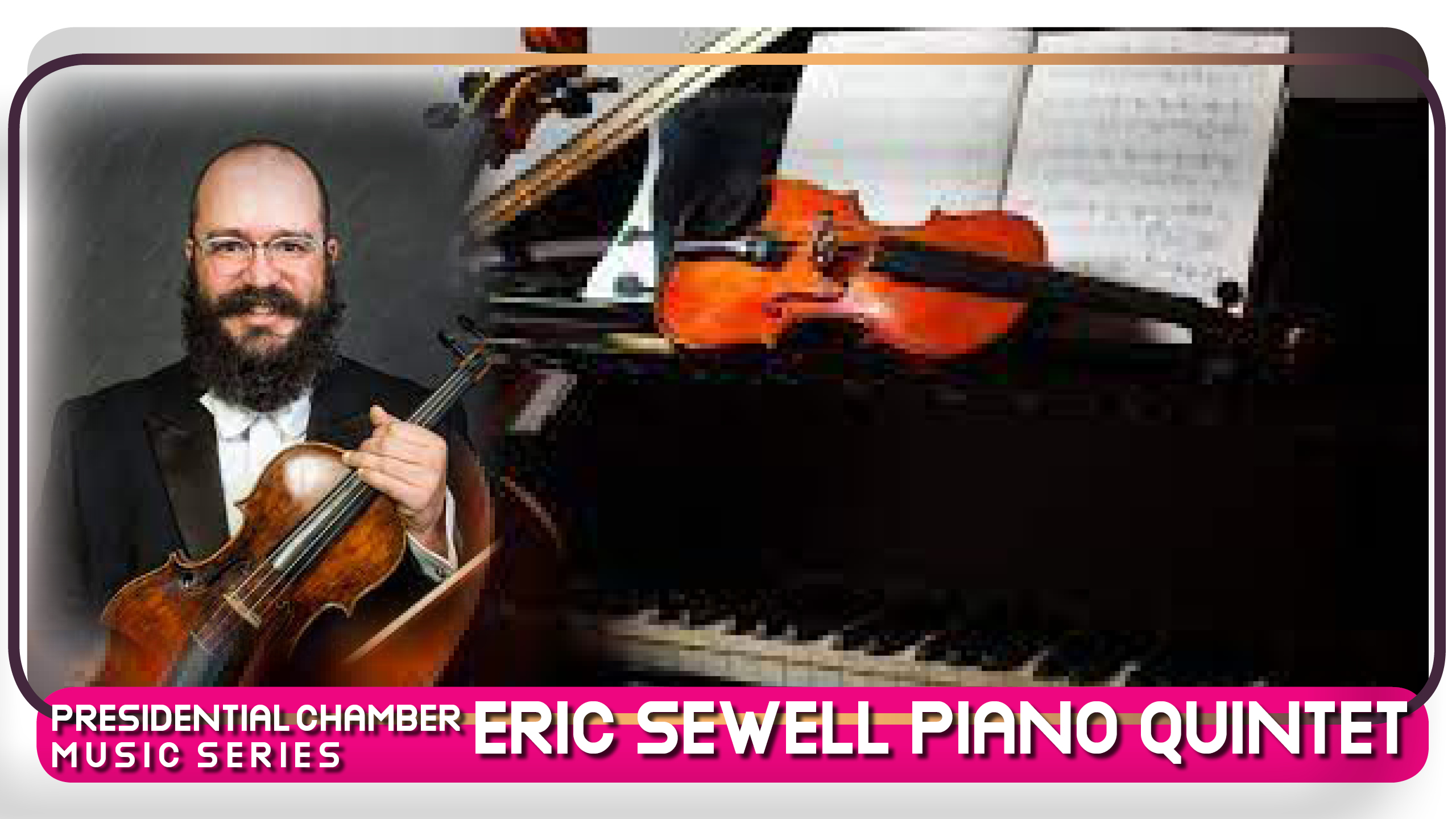 Writes curator of this concert, Socorro's own violinist Eric Sewell, "The Mahler and Beethoven quartets were both written in their composers' middle teen years and are rarities. They also are immensely accomplished works echoing contemporary masters—Brahms and Mozart—and foreshadowing the iconoclastic younger composers' later developments.

Emerging as a peer of Shostakovich and Prokofiev, Weinberg's relative obscurity outside of Soviet Russia is fading as international recognition of his creative genius rises. His piano quintet (1944) is a modern masterpiece and considered one of his finest compositions. It is just the right moment to bring this composer's expressive, dramatic music to new audiences."

Eric Sewell, Violin/Curator, holds degrees in Violin Performance and Musicology from the University of Alabama and Columbia University, and is an alumnus of the Alabama School of Fine Arts. His primary instructors were J. Patrick Rafferty, violin; Jeffrey Milarsky, conducting; Stephen Peles, composition. He has performed in orchestras across New Mexico and is the Assistant Principal Second Violinist of the El Paso Symphony Orchestra.

While in Alabama, Eric performed regularly throughout the Southeast appearing with numerous regional orchestras, and as a concerto soloist and chamber musician. During that time he performed at festivals of contemporary music across the country; collaborated with local composers on premieres of their works; and spent two summers at the Brevard Music Center as a Repertory Training Fellow. In 2001, he completed a concert tour of South Korea which included live broadcasts on radio and television.

Eric has put together a variety of unique concerts in Socorro, bringing together some of NM's finest Chamber musicians.  Last season, for NMT PAS, he co-organized a concert with Steel Pan virtuoso Mike Schwebke, forming a project ensemble +PAN Quartet, featuring contemporary international works re-arranged for steel pan, violin,  cello and piano, plus one commission for this concert.

As an academic, Eric received a grant to research the musics of Harrison Birtwistle and Rebecca Saunders and has written on topics from serialism and temporality to gender and avant-rock. He continues to curate a series of community concerts in Socorro and Magdalena featuring music of the last 100 years. Highlights include Stockhausen’s complete Zodiac and an extemporaneous accompaniment to silent films by Maya Deren.

Eric is also a paper sculptor, with a handful of commissions and a solo exhibition under his belt. He enjoys hiking and occasionally runs triathlons. His violin, The Traveler, was made for him by Anne Cole.

David Felberg, Violin, is instructor of violin and director of the Contemporary Chamber Ensemble at the University of New Mexico and the associate concertmaster of the New Mexico Symphony Orchestra. A native of Albuquerque, he performs regularly throughout the Southwest as concerto soloist, recitalist and chamber musician. He has appeared as a soloist with the New Mexico Symphony Orchestra, Albuquerque Philharmonic Orchestra, Noisy Neighbors Chamber Orchestra, Tucson Symphony and the Chautauqua Music School Festival Orchestra. David has performed solo recitals in Albuquerque, Santa Fe, Los Alamos, Clovis, Portales, and most recently on the Outstanding Artists Recital Series for the Emerald City Opera in Steamboat Springs, Colorado. In June of 2005, he made his New York City recital debut in Merkin Hall.

As a chamber musician, David has been a faculty member and performer with the Apple Hill Center for Chamber Music, and from 1993 to 1997 was a member of the Helios String Quartet. He is a regular on many chamber music series throughout New Mexico, including The Albuquerque Chamber Soloists, Noisy Neighbors, Taos Chamber Music Group, Serenata of Santa Fe, Los Alamos Coffee Concerts and the Placitas Artists Series, and performed the Mendelssohn Octet with the Takacs Quartet in Boulder, Colorado, in April of 1998.

Also active as a conductor, David has conducted the New Mexico Symphony Orchestra in its annual performances of The Nutcracker, and has guest-conducted the Santa Fe Symphony and the Beaux Arts Festival Orchestra in Steamboat Springs. In the summer of 2003, he made his operatic conducting debut in The Emerald City Opera’s production of The Magic Flute. He is currently the musical director of the Albuquerque Philharmonic Orchestra, and is the founder and conductor of Chatter, a chamber ensemble dedicated to performing 20th- and 21st-century music.

David received a Bachelor of Arts in History from the University of Arizona and a Master of Music in Conducting from the University of New Mexico, and has taken advanced string quartet studies at the University of Colorado. He has attended the Conductor’s Workshop at Bard College under the tutelage of Harold Farberman, and has also studied privately with maestro Bernard Rubenstein. In the summer of 2000, he was invited to attend the prestigious American Academy of Conducting at the Aspen Music Festival, where he worked with maestros David Zinman and Murray Sidlin, and with renowned conducting pedagogue Jorma Panula.

Jeffrey Smith, viola, is a modern and period violinist and violist. As a period musician, he has been seen with the Orchestra of New Spain, Austin Baroque Orchestra, Santa Fe Pro Musica Baroque Ensemble, Jeune Orchestre de l’Abbaye, the Bloomington Bach Cantata Project, Santa Fe Desert Chorale, Parish House Baroque, Utopia Early Music, Great Basin Baroque and Several Friends Early Music In The High Desert. In 2016, Jeffrey was a viola soloist in Mozart’s Sinfonia Concertante at the La Petite Bande Summer Academy in Italy under the direction of Sigiswald Kuijken. Jeffrey has also performed with many local performing ensembles here in the Land of Enchantment. Among those include the Santa Fe Pro Musica Orchestra Chamber Orchestra, San Juan Symphony, New Mexico Philharmonic, Chatter ABQ, Opera Southwest, and the Santa Fe Symphony. He has also served as a principal violist for the Pueblo Symphony. in Colorado.

Jeffrey received his Performers Diploma in Early Violin and Viola from the Historical Performance Institute of the Jacobs School of Music at Indiana University, where he studied with Stanley Ritchie and obtained his Masters of Music in Violin from New York University, studying with Stephanie Chase, Gregory Fulkerson and Cyrus Beroukhim. His Bachelors of Music Performance is from Brigham Young University, where he studied with Alexander Woods and Monte Belknap. He has also furthered his period performance training with Elizabeth Blumenstock, Julie Andrijeski, Cynthia Roberts, Elizabeth Wallfisch and Shunske Sato.

Aside from his musical endeavors his interests include violin making, cooking, traveling, exploring national parks and Mandarin Chinese.

Lisa Donald, Cello, is an Albuquerque native, having played cello in New Mexico for over 20 years. Her musical studies as a young adult took her all over the Southwest, and to Miami, Florida; and Kansas City, Missouri. After living and performing in New York City, she returned to Albuquerque to be near family and has been playing with regional orchestras and Opera Southwest, as well as producing and performing in smaller chamber and solo recitals. She teaches cello privately.

Luke Gullickson , Piano, and composer, is a rangy interpreter of music new and old, a virtuosic collaborator bridging disciplines, and an intrepid explorer of the unmapped space between styles and genres. He is Company Manager and a core performer with Albuquerque's innovative Chatter ensemble, which presents 70+ concerts annually. As a member of the mercurial Grant Wallace Band (“spidery original bluegrass” — New York Times), he has worked with Houston Grand Opera, Ensemble Dal Niente, and the Chicago Composers Orchestra, and performed in art spaces, jazz clubs, and barns across the country. Luke has recorded extensively as a singer-songwriter (“charmingly mysterious” — Bandcamp Daily) and bandleader. Many of his releases have appeared on the shadowy imprint Two Labyrinths Records, commencing with 2014’s Open, which the Chicago Reader labeled a “minimalist gem.” Luke has degrees in composition (University of Texas-Austin) and piano (University of New Mexico), and was a TD Jazz Fellow at the Banff Centre. He has also held artist residencies at PLAYA, High Concept Laboratories, Brush Creek Arts, the Ucross Foundation, Virginia Center for the Creative Arts, and Joshua Tree National Park.

The Presidential Chamber Music Series
The Presidential Chamber Music Series began 30+ years ago, conceived by Adam Gonzalez, faculty in the NM Tech Music Program under Director Michael Iatauro.  The first incarnation was supported by then NM Tech President Dr. Laurence Lattman, with all concerts free to the community, a tradition that continues, and featured The Helios Quartet, of which Adam Gonzalez was the cellist.  That group had a variety of members but the two with the longest tenure were principal violinist and concertmaster of the NM Philharmonic, Krzysztof Zimowski, and NM Philharmonic violist Willy Sucre.  When Adam Gonzalez left the Southwest, the Helios Quartet stayed together for only a short time, but the baton was picked up by Willy Sucre who curated these chamber music concerts, developing the works to be performed and bringing together the mostly NM musicians. These four concerts per year featured classic mainstays in chamber music literature as well as unique and lesser known compositions, often by international and/or South American composers.  The program continued to be sponsored by NM Tech President Dr. Daniel H. Lopez and now Dr. Stephen G. Wells.  It was an amazing 25+ years under Willy Sucre, who decided to take a break the year before the pandemic to pursue other musical passions.