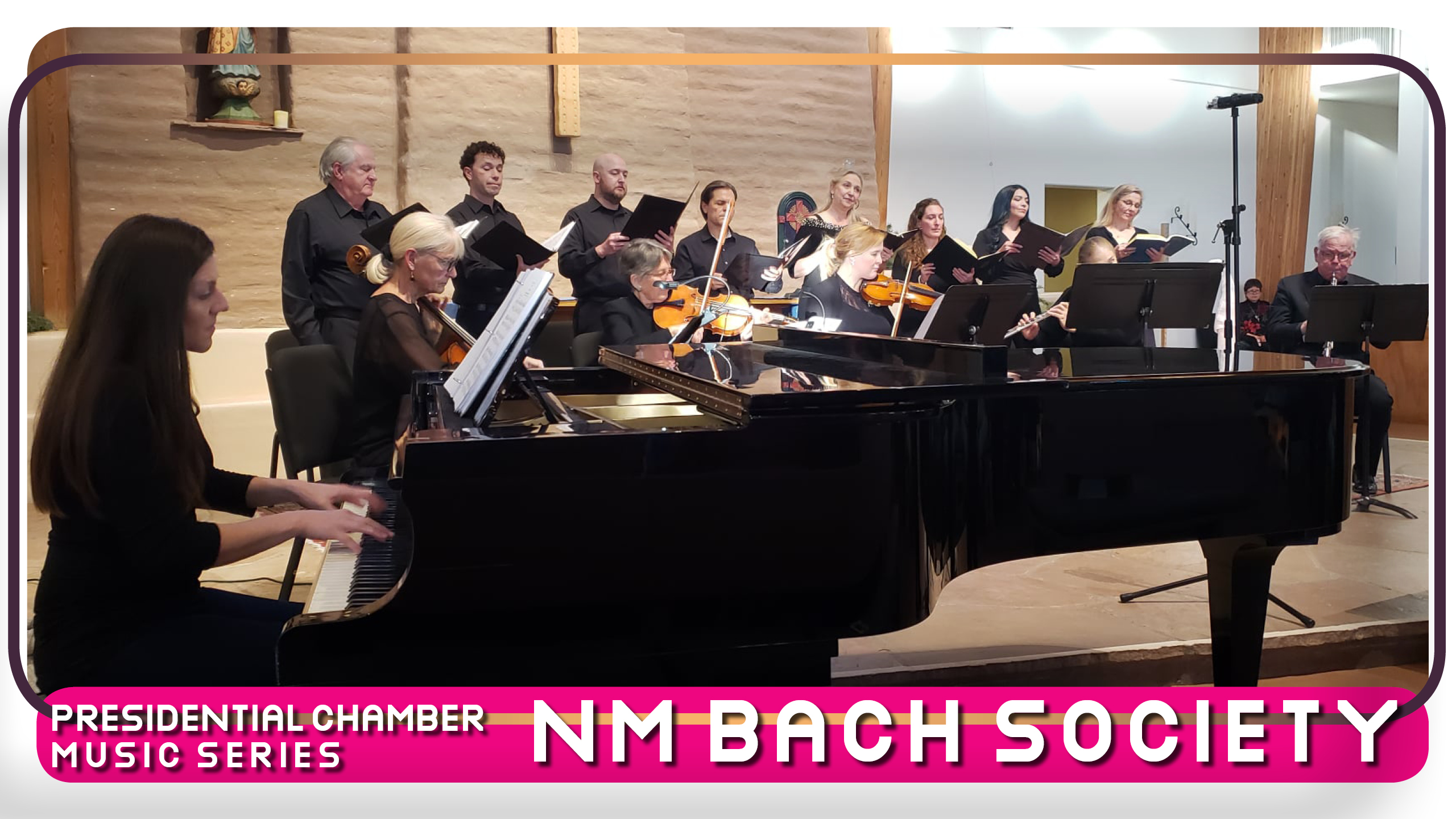 About the Concert
This concert will feature four NM-based vocalists, pianist and flutist, performing arias, duets, choral settings and keyboard music by Bach.  This is part of an annual concert series presented by the NM Performing Arts Society appropriately titled "The NM Bach Society."  The NM  Performing Arts Society is one of the leading nonprofit performing arts organization in New Mexico that exclusively uses and develops New Mexican talent.  NMPAS brings high quality performances to communities throughout the state, trains talented young people to become even better performers, and does this with a sustainable model that both pays artists a living wage and keeps overhead low.

Franz Vote, Conductor and Artistic Director, has been called one of the finest conductors of his generation. Named a “singer’s conductor” by reviewers, his rapport with musicians, both on stage and in the orchestra pit, elicits music-making of the highest level. Regarding his premiere of Les contes d’Hoffmann at the Metropolitan Opera, one reviewer noted, “… during the curtain call, a very unusual thing happened. Usually half or more of the musicians have left the orchestra pit by the time the conductor gets to take his curtain call, and he then has to stand there and extend his gratitude to an almost empty pit. Not this time. Last night most, if not all of the musicians stayed in their spots, and what’s more, they stood up and avidly applauded Franz Vote.”

Maestro Vote began his professional career in 1980 as a conductor at The Eastman School of Music and The Aspen Music Festival. In 1982 he was engaged at the Musiktheater im Revier in Gelsenkirchen, Germany, where he conducted Le nozze di Figaro, L’elisir d’amore, Giulio Cesare, Xerxes, and L’Orfeo. His successes there led to productions of Gianni Schicchi and Hans Werner Henze’s Don Chisciotte de la Mancia in Aachen. From there, he went to the Gärtnerplatz Theater in Munich and the Theater des Westens in Berlin. Maestro Vote’s approach to conducting is informed by extensive experience in German opera houses and his 1989 engagement at the Bayreuth Festival as Assistant Conductor to Daniel Barenboim and James Levine.

Maestro Vote achieved international prominence and received high acclaim as Music Director of Wagner’s Der Ring des Nibelungen at Seattle Opera in 2001 with soprano Jane Eaglen. Called the “musical Wotan of the production…..a real master of Wagnerian style….a conductor who brings out the best in his players,’’ the New York Times noted that his performance was “beautiful, conceptually unified and musically strong…Mr. Vote brought vigor and textural clarity to the score.”

Recent seasons have included Opera Memphis’ Samson et Dalila with Barbara Dever and Otoniel Gonzaga, Aida and Salome for Orlando Opera, plus touring with that company to Toulon, France; Faust at Sarasota Opera, which Opera News called a “Faust, passionately, arrestingly conducted by Franz Vote, who was as interested in theatrical sweep as in nuances of tempo and phrasing.” His recent performances of Lucia di Lammermoor at Opera Naples were called the company’s “best ever…every section was strong, tightly meshed and well-rehearsed. Vote’s direction created a seamless tapestry from [the orchestra] and the singers…”

Franz Vote currently lives in Santa Fe, New Mexico, where he is Music Director and Conductor of the New Mexico Bach Society and Vice-President of the New Mexico Performing Arts Society. He also guests conducts at various opera houses around the country.

She is particularly interested in recording standard repertoire in new ways and has a passion for introducing quality repertoire that is less widely known. Her numerous chamber music recordings for the Bavarian Radio Studios in Munich, Germany emphasize nineteenth and twentieth-century works for flute with piano and strings. “Baroque Sampler” (Swineshead Productions, Berkeley, CA 2001) features French and German works for baroque flutes and harpsichord. The American Music Research Center at the University of Colorado at Boulder commissioned the Marianiello-Reas Duo to record “Dialogues: American Music for Flute and Organ” (MSR Classics 2003). The success of the first CD led the Duo to release a second album, “Cantilena” (MSR Classics 2010). “Consolations” (MSR Classics 2008) features Romantic works by Franck, Widor, and Liszt. Recorded in the Europasaal in Bayreuth, “Consolations” showcases the more intimate sounds of a historic 1930 Verne Q. Powell flute and an 1872 Steingraeber Liszt grand piano.

Her desire to collaborate has led to the founding of many chamber music groups, among them The Con Brio Chamber Ensemble with colleagues from the Bavarian State Opera; The New England Trio with flutist Brooks de Wetter-Smith and pianist-conductor Franz Vote; The Chicago Fine Arts Chamber Players with Stephen Balderston, former associate principal cellist of the Chicago Symphony Orchestra and Professor of Cello at De Paul University, and pianist Aaron Krister Johnson, a multi-keyboardist, composer, and the artistic director of Midwest Microfest.

As a teacher, Linda Marianiello has served on the faculties of the City University of New York-Brooklyn College, Colorado State University, and the Summer Flute Institute at the Sherwood Conservatory of Columbia College in Chicago. She has performed and taught at numerous universities as a guest artist in residence including Yale, Cornell, Northwestern, De Paul, Rhodes College, Miami University of Ohio, SUNY-Fredonia, the University of Wisconsin-Madison, the University of Illinois at Champaign-Urbana, Brigham Young University, and the Xinghai Conservatory of Music in Guangzhou, China. Thanks to new technologies, Marianiello now also teaches extensively via the Internet.

Linda Marianiello lives in Santa Fe, New Mexico. Marianiello is president of the New Mexico Performing Arts Society, the umbrella organization that includes the Chapel Series at Immaculate Heart, Santa Fe Flute Immersion, and the New Mexico Bach Society. She is a Recording Studio Artist for Verne Q. Powell Flutes, which also sponsors her on tour and in recording. Her principal teachers are Bernard Goldberg, Walfrid Kujala, Thomas Nyfenger, Peter Thalheimer, and Andras Adorjan. Marianiello holds a B. A. from Yale University and an M. A. from the City University of New York-Brooklyn College.

Praise for NMPAS
“The concert was stunning. I cannot believe that this chorus and orchestra have not been working together for years. You both did an amazing job in organizing and preparing this. And Franz, the performance was so musical and well-paced- phrasing, nuances, and dynamics etc. … I thought all of the soloists were excellent. With a concert like this, I hope you will find many more backers- individuals and foundations so that you can expand on this. Let us know when you plan to have the next concert.” – Judith Auer, Voice teacher, Boulder, Colorado

The Presidential Chamber Music Series
This NM Tech program began 30+ years ago, conceived by Adam Gonzalez, faculty in the NM Tech Music Program under Director Michael Iatauro.  The first incarnation was supported by then NM Tech President Dr. Laurence Lattman, with all concerts free to the community, a tradition that continues, and featured The Helios Quartet, of which Adam Gonzalez was the cellist.  That group had a variety of members but the two with the longest tenure were principal violinist and concertmaster of the NM Philharmonic, Krzysztof Zimowski, and NM Philharnonic violist Willy Sucre.  When Adam Gonzalez left the Southwest, the Helios Quartet stayed together for only short time, but the baton was picked up by Willy Sucre who curated these chamber music concerts, developing the works to be performed and bringing together the mostly NM musicians. These four concerts per year featured classic mainstays in chamber music literature as well as unique and lesser known compositions, often by international and/or South American composers.  The program continued to be sponsored by NM Tech President Dr. Daniel H. Lopez and now Dr. Stephen G. Wells.  It was an amazing 25+ years under Willy Sucre, who decided to take a break the year before the pandemic to pursue other musical passions.