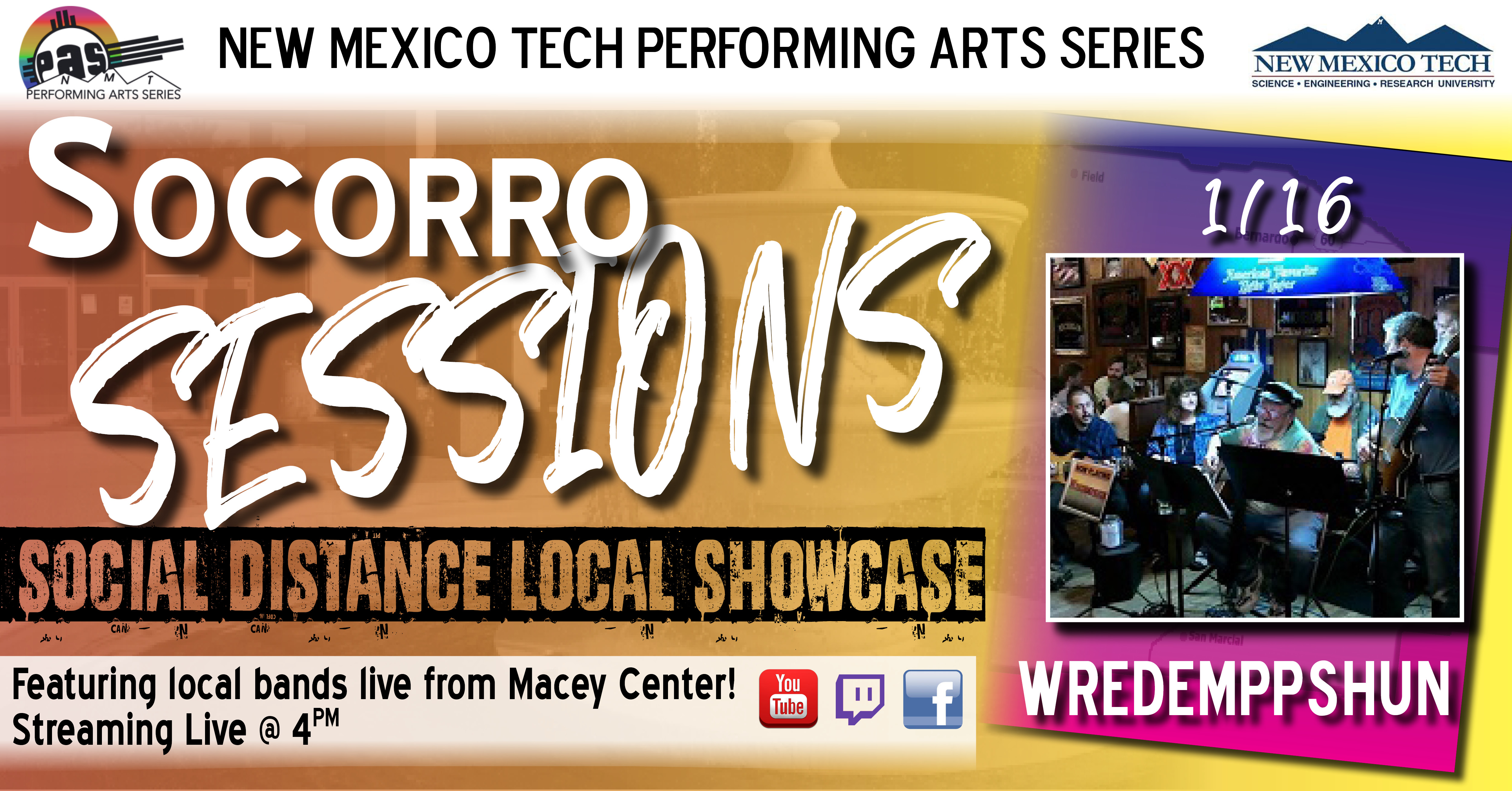 SOCORRO – It’s a new year and New Mexico Tech’s Performing Arts Series (PAS) welcomes in 2021 with Socorro Sessions, live music featuring a Socorro band on Jan. 16 at 4 pm. Since the pandemic still rules our lives, the concert will be streamed from Macey Center on Facebook,  YouTube and Twitch.

The concert is free but donations are welcome to help defray the costs of production. A donation button is visible on the PAS website, nmt.edu/pas, where one also can link to the live-stream Socorro Sessions and PAS concerts.

The first concert of the New Year features Wredemppshun, (pronounced “redemption”) a multi-generation group playing a mixture of rock, folk and bluegrass.

“We wanted something not too long but still unique,” said Dave Thomas, explaining the name. “This is easy to say but you don’t get it confused with other bands.”

Thomas and Brad Billings were members of the Vigilante Band, a legendary band of Tech graduates that played for decades during the college’s annual reunion. Thomas, a scientist of some renown, still teaches at Tech and works for IRIS/PASSCAL. He plays guitar and bass.

Another frequent contributor to the Vigilantes, Steve Senn recently returned to his native city. He played with the Vigilante Band on numerous occasions, and played for several years with the Maltby Crew, a rock band in Seattle, Washington. He plays acoustic guitar and bass guitar for Wredemppshun.

"Rooster" Ryder enjoys playing all types of acoustic guitars. When he's not doing expert automobile upgrades and repairs, or playing music, you can find him exploring New Mexico's wild spaces.

A relative newcomer to the music scene is Susan Welch. She plays the djembe, a skin-covered goblet drum originating in West Africa. She is active in Socorro's Drum Tribe, and has played with Old Habits and the Rio Grande Riff Zone bands.

Rounding out the band is Matt Thomas, Dave's son. He has played electric guitar with several bands, including the Peter Chase band and Shamani Reggae Music (Albuquerque), the Mose McCormack Band (Belen) and Country's Wine (Socorro).

When the Vigilante Band “officially” retired about four years ago, Dave Thomas organized a group of musicians to play instead. The result was a stage full of musicians they called Uncle Dave’s Big Band. They had played each year at the Capitol Bar on the Thursday evening of the reunion.

Similar in music genre, Wredemppshun plays rock, folk and bluegrass. While they play many familiar songs, the group also plays songs written by Socorroans including one by Burt Taylor and one from the Vigilantes, Dave Thomas said. “We play songs we like,” he said.