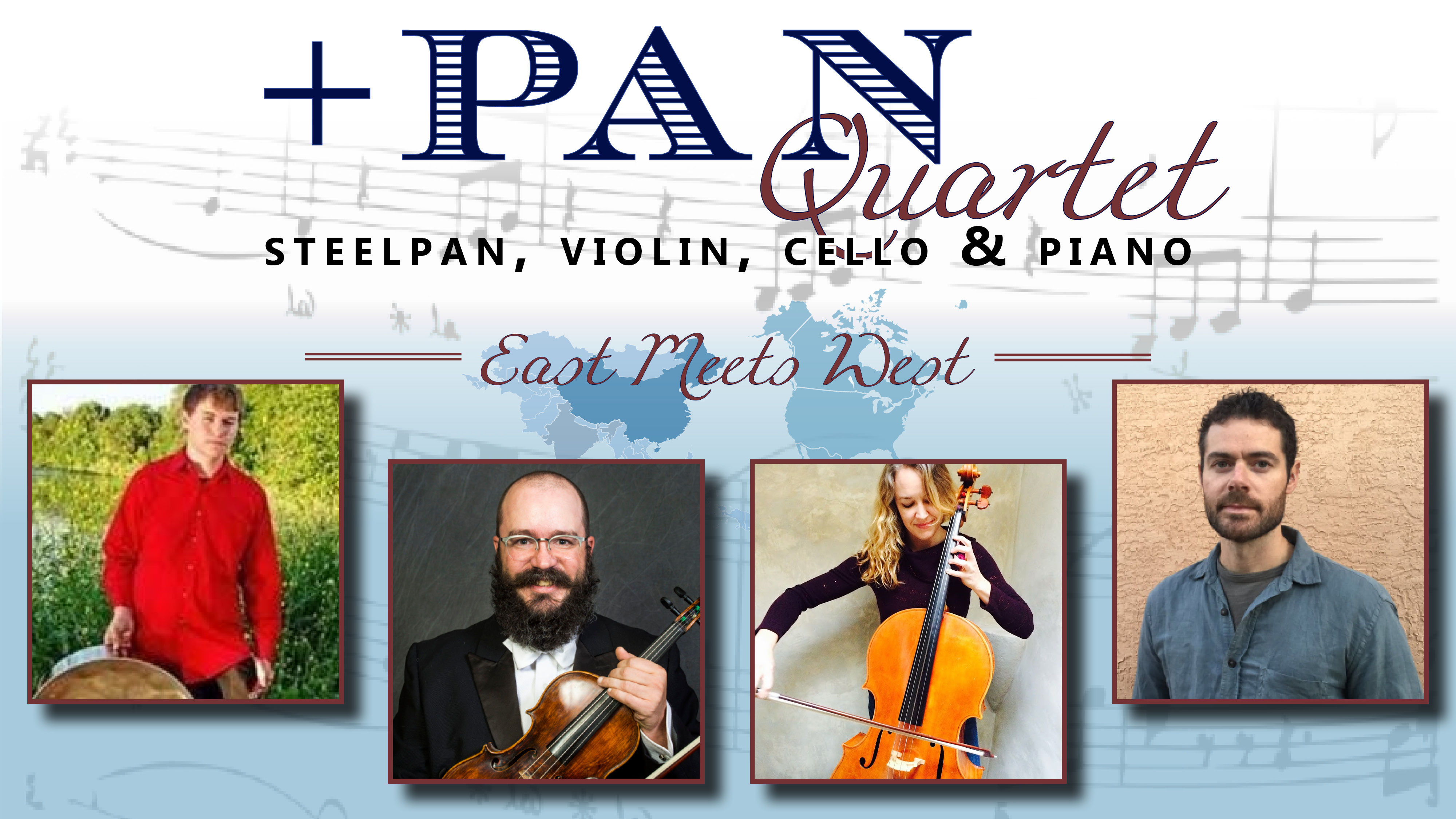 A unique evening of chamber music, with New Mexico-based musicians Mike Schwebke, steelpan, Eric Sewell, violin, Lisa Donald, cello, and Luke Gullickson, piano, who will perform contemporary works from the East and West, plus a commission by composer David Maki. This project, +Pan Quartet, is convened by the NM Tech Performing Arts Series for the Presidential Chamber Music Series and to tour to various NM venues.

About the Musicians & Composer
MIKE SCHWEBKE , Steelpan,  originally from Illinois but now a part-time resident in Socorro, NM, is a recording and performing artist on steelpan and percussion. He studied at Northern Illinois University, playing in the Latin Jazz Ensemble, Bata trio, several classical ensembles, and the internationally renowned NIU World Steelband.  Mike is the leader of CariJazz, that features some of Chicago's top musicians performing jazz from Trinidad, Cuba, Haiti, Puerto Rico, the United States, and even West Africa.  Mike is the host of the monthly Jazz Trials Jam Session, is a regular performer and guest soloist in world-music groups, steelbands and classical ensembles all over the United States and is an active educator and clinician.  Enabling the creation of new music for steelpan is a huge part of his artistic drive. In 2011 he completed his first collaboration with composer Kyle Krause. The result was a three- piece suite of short works for steelpan solo and duet. In fall of 2013, Mike gave a recital of almost entirely new music for steelpan. In 2016, he premiered a duet for Double Second Steelpan and Clarinet by Krause and performed previously commissioned works as a guest in a composition lecture at the Peabody Conservatory. In 2018 he performed a program of all commissioned pieces for steelpan, and in 2019 he premiered Aaron Gage's "On the Mercurial Tides" for wind ensemble with steelpan soloist.  He has performed with various ensembles at the Hyde Park Jazz Festival, Matthew Tembo World Music Celebration, Denver's City Park Jazz Festival, Summer Solstice Indie Music Festival, Santa Fe Bandstand, the Montreal International Steelpan Festival, the Patagonia International Percussion Festival and many others.

ERIC SEWELL, Violin, a Socorro, NM resident, holds degrees in Violin Performance and Musicology from the University of Alabama and Columbia University, and is an alumnus of the Alabama School of Fine Arts. He has performed in orchestras across New Mexico and is the Assistant Principal Second Violinist of the El Paso Symphony Orchestra.  While in Alabama, Eric performed regularly throughout the Southeast with numerous regional orchestras, and as a concerto soloist and chamber musician. During that time he performed at festivals of contemporary music, collaborated with local composers on premieres of their works, and spent two summers at the Brevard Music Center as a Repertory Training Fellow. In 2001, he completed a concert tour of South Korea which included live broadcasts on radio and television.  As an academic, Eric received a grant to research the music of Harrison Birtwistle and Rebecca Saunders and has written on topics from serialism and temporality to gender and avant-rock. He continues to curate a series of community concerts in Socorro and Magdalena featuring music of the last 100 years. Highlights include Stockhausen’s complete Zodiac and an extemporaneous accompaniment to silent films by Maya Deren.

LUKE GULLICKSON , Piano, is a composer and pianist working in the unmapped spaces between folksong, improvisational styles, and contemporary classical composition. A founding member of the infamous Grant Wallace Band (“spidery original bluegrass” — New York Times), Luke has recorded extensively as a singer-songwriter ("charmingly mysterious" — Bandcamp Daily) and bandleader. Many of his releases have appeared on the shadowy imprint Two Labyrinths Records, commencing with 2014's Open, which the Chicago Reader labeled a "minimalist gem."  ​Luke holds graduate degrees in composition (University of Texas-Austin) and piano (University of New Mexico), with additional autodidaction at the Banff Centre for the Arts. He has held artist residencies at PLAYA, High Concept Laboratories, the Ucross Foundation, Brush Creek Arts Foundation, Virginia Center for the Creative Arts, and Joshua Tree National Park. Based in Albuquerque, Luke is Company Manager and a frequent performer with Chatter, an innovative concert series presenting classical and contemporary chamber music in informal venues. He writes a highly occasional email newsletter, Sonatas and Interludes, and a blog of wandering course, entitled A Word.

LISA DONALD, Cello, is an Albuquerque native, having played cello in New Mexico for over 20 years. Her musical studies as a young adult took her all over the Southwest, and to Miami, Florida; and Kansas City, Missouri. After living and performing in New York City, she returned to Albuquerque to be near family and has been playing with regional orchestras and Opera Southwest, as well as producing and performing in smaller chamber and solo recitals. She teaches cello privately.

DAVID MACKI, Composer, will premiere a new work for +Pan Quartet, specifically for this NM project.  A composer and pianist living and working in the Chicago area, Maki’s music has been performed widely at regional, national and international venues by many diverse ensembles and musicians. His music has been described as “fresh and unusual" by All Music Guide, “vivid, languid, introspective" by American Record Guide and “meditative and beautiful" by Fanfare Magazine. Maki also is a performer of new music. He has performed with many ensembles such as Brave New Works, University of Iowa Center for New Music, Prime Directive and Due East. He has toured Scandinavia twice as pianist with Amerikan Laulajat, and served as pianist for the University of Iowa Philharmonic and the Cedar Rapids Symphony. In 2015, with pianist Ashlee Mack, he premiered three movements of his “Five Impromptus for Two," for piano duet.  Currently, Maki is on the faculty of Northern Illinois University, where he is Associate Professor of Music, and serves as Assistant Director and Coordinator of Music Theory and Composition in the School of Music.