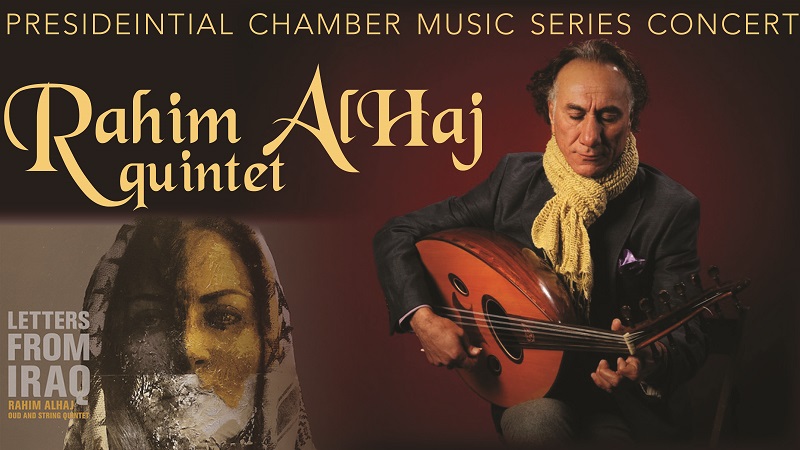 About the Artist
Rahim AlHaj, virtuoso oud musician and composer, was born in Baghdad, Iraq and began playing the oud (the grandfather of all stringed instruments) at age nine. Early on, it was evident that he had a remarkable talent for playing the oud. Mr. Alhaj studied under the renowned Munir Bashir, considered by many to be the greatest oud player ever, and Salim Abdul Kareem, at the Institute of Music in Baghdad, Iraq. Mr. AlHaj won various awards at the Conservatory and graduated in 1990 with a diploma in composition. He holds a degree in Arabic Literature from Mustunsariya University in Baghdad. In 1991, after the first Gulf War, Mr. AlHaj was forced to leave Iraq due to his activism against the Saddam Hussein regime and began his life in Jordan and Syria. He moved to the US in 2000 as a political refugee and has resided in Albuquerque, NM ever since. Rahim became a US citizen on August 15, 2008.

Rahim has performed around the world and is considered one of the finest oud players in the world. He has won many accolades and awards including two Grammy nominations. Rahim has recorded and performed with other master musicians of varied backgrounds and styles including genre-busting American guitarist Bill Frisell, modern accordion innovator Guy Klucevsek, Indian sarod maestro Amjad Ali Khan and indy-rock pioneers REM. He has composed pieces for solo oud, string quartet, symphony and beyond. Rahim’s music delicately combines traditional Iraqi maqams with contemporary styling and influence. His compositions evoke the experience of exile from his homeland and of new beginnings in his adopted country. His pieces establish new concepts without altering the foundation of the traditional “Iraqi School of Oud."

About the String Players

David Felberg – Violin I
David Felberg, violinist and conductor, is concertmaster, Santa Fe Symphony; music director, Albuquerque Philharmonic; and associate concertmaster, New Mexico Philharmonic. He also teaches contemporary music at the University of New Mexico and is artistic director/co-founder of the contemporary and traditional music venue called Chatter. He has performed as a soloist, recitalist, and chamber musician, and conducted from New York to Santa Fe. Native to Albuquerque, he earned a BA in History, University of Arizona and a Master of Music in Conducting, University of New Mexico.

Ruxandra Marquardt – Violin II
Ruxandra Marquardt plays in the Santa Fe Symphony and the New Mexico Philharmonic. Born in Romania, she attended the George Enescu University of Arts and performed in national and international competitions and festivals. In 1986 she came to the U.S. for a competition and seized an opportunity to remain, studying thereafter at Indiana University and Syracuse University, where she joined the faculty and was associate concertmaster of the Syracuse Symphony. She maintains a violin studio while continuing to perform internationally as a soloist, and in chamber and symphonic orchestras.

Luis Barrionuevo - Viola
Brazilian musician Luiz Barrionuevo began his musical studies when he was ten years old. He participated in almost all relevant youth and professional orchestras in São Paulo, as well as international music festivals in South America, Europe and the US.  He is a graduate Music Performance student at the University of New Mexico in both violin and viola, and also performs as a musician with New Mexico Philharmonic and Santa Fe Symphony orchestras.

Notes on the Program:  LETTERS FROM IRAQ
by D. A. Sonneborn
Sometime in 2002, as the first news that the U.S. was planning to invade Iraq came, I had the idea to produce an Iraqi classical music album to deepen our audience’s appreciation and understanding of Iraqi culture. I was introduced to Rahim AlHaj by our mutual friend Steven Feld. AlHaj is unquestionably a virtuoso player on the oud; he is firstly and above all a composer. Back then, AlHaj graciously agreed to record an album exhibiting the Eastern Arabian classical tradition. With the wholehearted support of Daniel E. Sheehy, then curator/director of Smithsonian Folkways, When the Soul Is Settled: Music of Iraq (SFW40533) was released in 2006. Now, with the eight compositions collected in Letters from Iraq, AlHaj offers a deeply personal musical documentation. The compositions are what Western music scholars call program music, intended to give rise to imagery or tell a tale, which is hinted at in titles and sometimes described in text, but without words performed with the music. To my ear, Rahim has drawn an Ariadnean thread of continuity through all he learned from his Baghdad conservatory teachers—who taught Arab, Turkish, and Western composition and theory—followed by decades of playing with and listening to musicians and music from all over the world. He has fully absorbed music of his own tradition, of world cinema and broadcast media, as well as of the European Romantic period and the life work of his maestro and mentor, the great Munir Bashir. Rahim explained his approach to the music on this album:

“All my music, perhaps all human-made music, touches upon our shared humanity. Especially since arriving in the U.S., my music is about a part of all of us that is very hard to face, but feeling deeply for others matters. I must do what I can to bring deep feelings more into our world. That’s what these pieces are about, giving account, reporting a story. How else to document this period in Iraq’s history, from Saddam Hussein’s capture in 2003 until now? How else can I, can we, acknowledge the pain of the people there? They had suffered so much, and are suffering again now in terrible ways. Has the Iraqi soul been settled in these years? Listen.”